Mad Cycle Lanes of Manchester: The Trans Pennine Trail - Heatley to Dairyhouse La...: This is a three and a quarter mile section of former railway from the edge of Rushgreen just over the border in Cheshire to the edge of Bro...

The super Mad Cycle Lanes blog has picked up on the section of trail I have previously moaned about.

I love this blog.

But I am not suggesting A frames.  I was asking for input on their problems.

Included is the new entrance from the car park with the swing gate.

Thanks MCLoM x
Posted by Unknown at 14:22 No comments:

I Love My Local Bike Shop

Like Tom Cruise on Oprah, I am feeling all loved up at the moment.


Without sounding too schmoozy, they are the nicest bunch of blokes I have ever met.

Ladies and Gentlemen the wonderful Bike Shak Altrincham also to be found on twitter if thats your thing....

I called knowing they were probably too busy to help me.  Their workshop is so popular (cos its good) its normally booked up for a fortnight.  But no, bring it down, lets have a nosey.

I have been having indexing problems for sometime and during the Manchester 100 it meant for a few miles towards the end, I couldn't get on my big ring.

H brought his Toddlebike and sat and watched Joe while he worked away.

Bless him, he was still shouting "BYE JOE" by the time we had got three miles down the road.

Whilst there, we talked about their lack of female customers.  It has got me thinking why it might be.  The easiest answer, is just the lack of women cycling.  But hang on......I know hundreds of women cyclists around the Manchester area.  Hundreds.

OK, so they're all not local to Altrincham, but where are they going?

One problem a lot of Indie Bike Shops have, is they're tucked away.  Often you find the only people who know they're there are other cyclists (if that makes sense). Is it a lack of high street presence then that manifests itself in a lack of female customers.  Do they prefer to go to a big chain (like Evans)? Does it feel more like the Tesco shop?  I realise I am in danger of being sexist, but I think its an important issue.

I am going to ask the other Breeze Ride Leaders and the ladies from Glow what they think and report back.

A few months ago, it was suggested a few people from Seamons might like to ride the Manchester 100. Its no biggy for most of them, but for me it was going to be my first bike event.

I have done Sprint Triathlons before, but never anything so long.

I stupidly agreed and set about doing a bit of training. My plans of lots of summer cycling were consumed by the uncoordinated turmoil of the summer holidays and compelled by a general malaise.

By the time I had got the the start line, I had just a 45mile ride under my number belt.

I took the sensible decision early on to ride the 100k rather than the 100m.

The ride started at an already busy Wythenshawe Park.  I had set off at 6.30 to be there for a Seamons photo call at 7. My partner in crime (Frodo) had spent too long having all round faffage so it meant we got there just after and missed them

They had invoked rule #87 http://www.velominati.com/the-rules/

After speaking to some of the lovely Glow Ladies and posing for a photo we collected our route map and headed off.  I was amazed at how many of the riders completely ignored the first few red lights!  Its not a race.  Is your bike computer that shit it cant tell the difference between stopped and moving time? Good grief!

I think the route took in nearly every single hill I hate in a 50 mile radius from where I live.  I have never been more glad I took a shorter route in all my days.  I take my hat off to the 100 milers.

Anyway, here is my first ever photo in race kit.  Thank you to http://www.cyclesportphotos.com/ for sitting at the top of a huge hill and laughing at our anguished expressions. 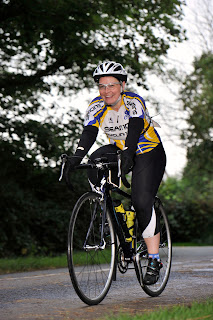