I was lucky enough to be part of last years trial for Toddlebike and the lovely Jo Hockley.

It occurred to me when Jo asked for the next batch of testers that it had been a year that we had been toddlebiking.

Here is a link to my review on the Toddlebike site 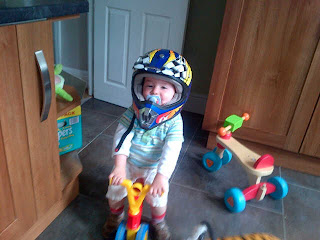 Harry got his Toddlebike at 18mths and after a few false starts he was away.  The fact it is light enough to be picked up by a small toddler meant it came everywhere with us and the design meant that if he got fed up and wanted to walk, it was easy to hang on the buggy.

I may suggest to Jo a carrying strap for days when you are without the buggy.

Harrys love of his toddlebike, meant that for a while he turned into a miniature Madge from Benidorm choosing to scoot everwhere, even in the house rather than walk.

One morning he managed to get his entire breakfast ready and eat it without ever getting off his trusty steed!

As I mentioned in my review on the official site, the fact he used it so very much meant his transition to two wheels was very rapid indeed.  He had his second birthday party at one of the Strider Cup sessions at the Velodrome in Manchester. 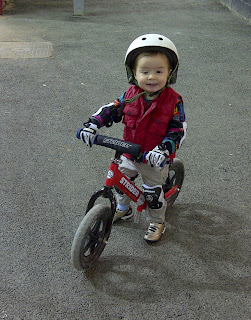 We even made an appearance on BBC Breakfast!


So 12 mths after and now having progressed onto two wheels is our relationship with Toddlebike consigned to the past?

Well I will admit, I thought it might be.  It was what I had expected.  But considering the price of Toddlebike, I didn't mind one bit.

But no!  A year later and it is still without equal in the played with stakes.  It is an almost constant companion.  Perhaps it is because we are lucky to have enough indoor space for him to scoot, I don't know.  I had thought about donating it to his Nursery, but they will have to wait quite some time I think!

I genuinely can't say enough nice things about Toddlebike.  I wish the company and Jo every success for the future.

Mr Pickles has squarely laid the blame for failing High Streets at the feet of poor old parking attendants.

The whole sorry mess of boarded up shops and neglected ghost towns, its all the fault of some poorly paid person, who walks the streets everyday trying to make a living by enforcing rules that they have had no hand in shaping.

It even lead to one 'journalist' to call them names like Urban Pests.

Cristina went on to say "I blame traffic wardens for  local shops' slump in sales, restaurants' empty tables, and over-congested roads", yet she has no evidence to back up this claim.

And lest we forget that tabloid journalists are not renown at present to being truthful, or basing anything on fact.

She continues with "I live in central London, thanks to heavy-handed traffic wardens I rarely have friends dropping by: they daren't risk a fine."  Now I will venture into her realm of opinion not based on fact, but I doubt its the fines that's keeping them away....

But back to Mr Pickles.  He believes "I believe we need to give people the good grace to pop into a local corner shop for 10 minutes, to buy a newspaper or a loaf of bread without risking a £70 fine."

Mr Pickles, may I suggest that you don't need to drive to your local shop?  That is is this fact that damages local business.  The fact that our streets have become such unpleasant places to be, that people feel compelled to travel everywhere in their own 2 ton VIP section of tin box?  Surely you can see that this is unsustainable.  We have to enforce parking outside local shops because of fat lazy twats in their cars who will only drive everywhere.

I am generalising, but hey, take a look in a mirror some time Mr P.

Why are people still blaming parking as a reason?  I went to have a look at our local council to see if they were to blame.  I like blaming them for all sorts.

Oh, bugger, 10p for an hours parking.  Hmmmm I am sure Cristina and Eric can stretch to 10p to park?

Then Mary Portas jumps on the band wagon.

I am beginning to sense some sort of collusion as this is not the first time their names have been linked.

Have they changed anything? Not as far as I can see. And I sense an uneasy backlash building among the Portas towns where regeneration is supposed to be happening.  Tales of money being spent on Peppa Pig outfits do nothing to give the project credibility.

But it is quite simply that they are paying lip service to the whole process of regeneration.  It is a complete smoke screen to appear caring without having to do any actual work.

To stop High Streets failing will take real political will for things to change and investment at a time of austerity and I very much doubt our current Govenment have the backbone for such an undertaking.

Boris. (sorry its a bit sweary)

Unless you have been half asleep, or not knee deep in a twitter feed of cyclists sat typing with their mouths half open, not quite believing what was being announced, then you will know all about Boris' announcement today that he is going to spend lots of money on cycling.

I kid you not.  OK, its not a complete panacea, its nowhere near on the same levels as a road building scheme and its not even the coffee, tea and biscuits budget for HS2, but in terms of the UK, it is an unprecedented level of money being allocated to improving cycling for them dahn sarf in Larn-darhn.

Whilst the cycling community and everyone else who would like to venture onto two wheels were it not for the Alton Towers factor of sharing the Capitals roads with HGVs and cocaine fuelled motorists (yes I have heard the urban myth about £20 notes in London) cheered from the cheap seats, the scheme was not without its naysayers.

The response from Mr Lawson of the Alliance of British Drivers was that Mr Johnson's vision was "bonkers".

OK, I am not going to listen to you if you use the word bonkers as an argument   That's the sort of thing my kids....oh no wait....they wouldn't either.

He said: "As a London taxpayer I strongly object to this waste of financial resources on a scheme that favours cyclists over other road users.

As a UK taxpayer for 20 years (I know I am only a wee whipper snapper), you can go fuck right off.

I am sick to bleeding death of the bleating, hand-wringing motoring lobby.  "Please sir, don't be unkind to us...."

Piss off.  This country, this Government and previous Governments have presided over the subsidisation of car use over and above every single other road user.  Over pedestrians and over cyclists.  Greedy greedy greedy.  We all pay.  All of us, for your 'right' to own and drive a car.  Everyone.  All the cyclists and all the pedestrians.

So at long last a small, really small in the scheme of things, thing is being done to redress the balance.

And you Mr Lawson, sound like the spoilt little shit at school who never gets invited anywhere because you wont play nice and share.