Apparently I am immature.

If you read my blog, you are probably nodding.

If you know me then I have a steadfast confidence that you are going "no shit Sherlock".

You either 'know me' or you know me.

What I really object to, is some moron at an ad agency, telling me I am childish or immature. 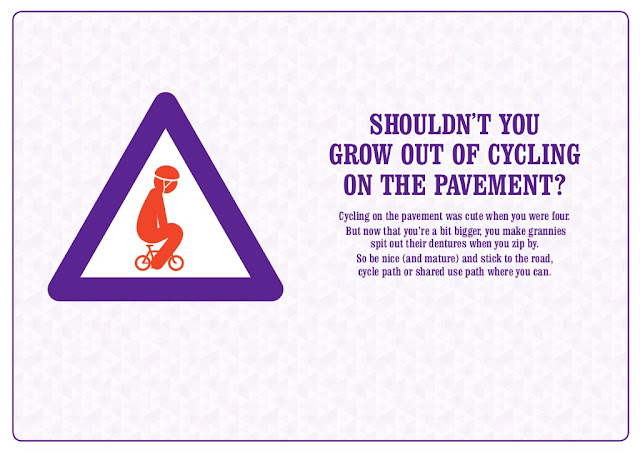 I really don't know where to start.

I do cycle on the road.  Along a main arterial road that is 4 lanes of extremely busy and hostile traffic. Compounded by a huge amount of heavy goods vehicles and buses. Yes you are absolutely fucking right I use the pavement.  Especially when I am cycling with my toddler in his trailer or my 8yr old son.

Now don't get me wrong. I am happy to fly along this road on my road bike and keep up with the traffic on a Sunday morning, but if anyone is to suggest I am childish for not cycling in amongst rush hour traffic while I am with my son, leaves me apoplectic with fucking rage.

Not only am I fucking furious at being called immature, what I am doing is perfectly fine according to the Government.

"The arguments for including cycling on the footpath in the fixed penalty regime were given in a Home Office consultation paper issued in July 1996:

Cycling on the pavement is an offence which presents particular difficulties for enforcement. Many cyclists, not just children and teenagers, feel anxious and exposed when riding in traffic and therefore use the pavement for safety. This is understandable and must be taken into account in enforcement. But pedestrians also have the right to use the footway without facing the hazard of cyclists approaching them or coming up from behind. This practice can be especially worrying for the elderly, the infirm and the very young, and accidents have resulted.

Against this background, it is considered desirable to have a more flexible- system to respond to the varying nature of the situation. The existing enforcement arrangements are limited, in that the choice is normally between issuing a verbal warning and instigating prosecution in the courts. The provision of a fixed penalty would provide a middle course of action and greater flexibility of enforcement.

It is recognised that the enforcement of cycling offences can be more difficult than for motoring offences because of the absence of special identification for individuals and their cycles. But these difficulties can be taken into account by the police when deciding on their response to the problem. The police's discretion on how to enforce the law in this area will be particularly important in establishing the right balance. It is considered that the addition of a fixed penalty should help.

There is a letter from the then Home Office Minister, Paul Boateng, reproduced frequently on cycling sites on the Internet, which states that in relation to enforcement of this offence:

The introduction of the fixed penalty is not aimed at responsible cyclists who sometimes feel obliged to use the pavement out of fear of traffic and who show consideration to other pavement users when doing so. Chief police officers, who are responsible for enforcement, acknowledge that many cyclists, particularly children and young people, are afraid to cycle on the road, sensitivity and careful use of police discretion is required."

I consider myself responsible.  I am out cycling with the two most precious people in my life.  Why would I not be.  I don't whiz. I give pedestrians their legal right of way.

But here we have the same situation. The (not) Nice Way Code tarring all cyclists with one great big shitty brush.

Maybe its not me that needs to GROW UP!